This post was first posted by me on etcjournal.wordpress.com (later etcjournal.com) on July 12, 2009. See http://etcjournal.com/2009/07/12/google-book-search-settlement-unfair-to-non-us-authors and the version saved on the Internet Archive on November 24, 2009. The H4 styles for titles are in the original.

Of Books and Vegetables

I first thought of calling this post “Of Books and Vegetables” because, when I half woke up the morning after I sent a letter of objection to the Google Book Search Settlement, I remembered Ms B. and the building site for a middle school in Cortona. The building activity had stopped just after the ground had been cleared, due to blocked funds. So for two years,  Ms B., who lived on the other side of the street, used it  to grow very tasty tomatoes and zucchini No one objected to this private exploitation of  the site: it would have been silly to waste its potential, and Ms B. generously shared her vegetables with friends and neighbours. When the funding issue was solved, the building started again and her vegetable patch was bulldozed.

I chose a more conservative title because the analogy with Google scanning out-of-print works in libraries is imperfect: if a big canning industry, instead of Ms B., had started to grow vegetables on the building site,  the borough of Cortona would probably have tried to levy a rental for this use. But the principle remains: it is silly, even immoral, to waste potential revenue – especially if its exploitation will serve the public.

So I did not object to the Google Book Search Settlement for the same proprietary reasons as the eminent cultural personalities who signed the Heidelberg Appeal (English text – German text with signatures):

Actually, I did not mean to object: at first I only challenged the Settlement Registry’s classifying as  “not commercially available” the Google scan of  Theatre of Sleep, an anthology my late husband Guido Almansi and I had edited and published with Pan Books in 1986 – and for which, after his death in 2001, I was the remaining mentioned copyright holder.

The physical book has indeed been out of print for years, but it contains many excerpts from in-copyright and commercially available works, which we had obtained permission to use in – and only in – the Pan Book version. Even if the Settlement foresees the possibility for right holders on such excerpts to claim them and forbid Google to display them, some right holders might not know about the Settlement, or not remember exclusive permissions granted decades ago; besides, the search engine of the Settlement registry often does not find the authors of such excerpts. Under our initial transactions for Theatre of Sleep, I am answerable to these right holders – no pact between parties who had nothing to do with these transactions can change this.

Another reason not to allow Google to display even the rest of the anthology under the Settlement’s conditions was the absolutely unacceptable digital restriction of what – paying – users would be able to print or copypaste from Google books. Such digital restriction measures just don’t work: in Copying from a Google Book, I show how easy it is to do so even with theoretically thus restricted works. And if users pay for an e-book, they should be able to do what they want with it for personal use. So I made an unprotected e-version of what was legally offerable in Theatre of Sleep, and uploaded it  in archive.org/details/TheatreOfSleep, an in-progress version because I will re-add in-copyright texts when I get permission again.

Foreign authors and the Settlement

I could have left things at that, without objecting to the Settlement. But Peter Brantley of the Internet Archive pointed out in an e-mail that many people who are hit by the Settlement and utterly dislike it do not object because it is too complex and they have no legal training. This is my situation too, so I included the excessive complexity of the Settlement in my objections. 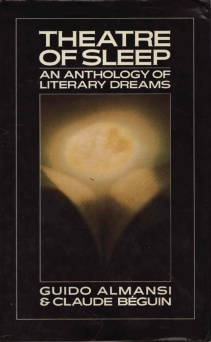 Then there was another reason for objecting. Guido and I also did an adaptation of Theatre of Sleep for the Italian readership – Teatro del Sonno – which was published by Garzanti in 1988, is out of print, and has been scanned by Google. For that one we had ceded the copyright to Garzanti, mainly because we did not want to send the permission requests all over again and Garzanti could do that more easily.

But Garzanti has not yet claimed Teatro del Sonno under the Settlement. Its editorial director explained to me that Italian publishers have chosen to wait for the result of the Final Fairness Hearing about it, in case it results in its invalidation: due to the imprecision of the Registry’s search engine, checking what Google has and has not scanned is very time-consuming. Though they are very displeased with the Settlement, Italian publishers are not objecting either, apparently. Above all, they are not systematically informing their authors about the Settlement.

Considering what little info non-US media gave about the Settlement, we are left with the impression that it was a US-only affair. However, this lack of information puts non-US authors at risk. As Mary Minow explained in Google Book Settlement, orphan works, and foreign works (LibraryLaw Blog, April 21, 2009):

The largest group of non-active rights holders are likely to be foreign authors. In spite of Google’s efforts to publicize the settlement abroad, I suspect that most foreign rights owners of out-of-print books will fail to register with the Registry.  There are a couple of reasons for this.  For one, they may not know that their book is still protected by copyright in the US.  In addition, they may assume that international network of reproduction rights organizations would manage their royalties, and not understand the need to register separately. . . .

If there is an injustice being done in the settlement, it is with foreign authors.

Also, if foreign right-holders do not object to the Settlement, how is the US Court to know that they disapprove of it?

View this document on Scribd

I have gathered / am gathering some bookmarks about the Settlement in diigo.com/user/calmansi/googlesettlement. Several of those, in particular about its repercussions outside US, come from the very useful Google Settlement Information, Documents, News &  Links page in Michael W. Perry’s Inkling Books.

By order of appearance:

The contents of Bloglillon that are made by Claude Almansi are licensed under a Creative Commons Attribution-ShareAlike 3.0 Unported License. Works by others reused, quoted, streamed etc. in this blog are under their authors' copyright license.

The blog header picture is a detail of Gigadrawing work in progress by gwenboul, under an Attribution-NonCommercial-ShareAlike 2.0 Generic (CC BY-NC-SA 2.0) Creative Commons License.
%d bloggers like this: